We had four grown men and a stationwagon. We had mountain bikes, backpacks, paddles, life jackets, shoes, and all the food and extra gear required of a weekend away.

We had 200 miles to drive. Fortunately, we also had a trailer. 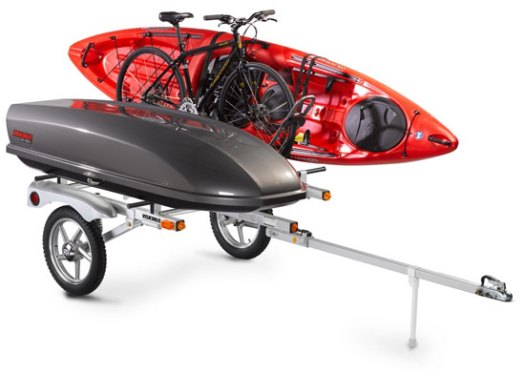 Yakima Gear Trailer all loaded up

The RackandRoll trailer from Yakima, a unique gear-hauling creature, offers massive capacity for bikes, boats, and other bulky gear.

Two wheels, an aluminum chassis, and a trailer tongue comprise the skeletal system. Yakima includes a set of its rack-mounting bars, which affix on the trailer to create a blank slate of a platform for attaching carriers of all sorts.

Our trailer, a loaner from a local Yakima sales rep, came ready to go with four bike mounts and a large gear box in the middle. We rolled our mountain bikes onto the trailer and cinched them on for the ride.

Yakima Gear Trailer in its base form

When empty, the RackandRoll weighs about 160 pounds — light for a trailer. My immediate concern was with bumps and high speeds on backcountry roads. If we hit a rut would the trailer bounce or go airborne with our bikes and gear taking a jarring hit?

Happy to say that did not happen. Yakima includes independently adjustable suspension on each wheel with about 4 inches of travel. The company uses motorcycle shocks that offer “about twice” the cushion of what’s used on standard trailers, Yakima cites.

On our drive, a four-hour journey to an adventure race, more than once I winced when we hit a bump. But looking in the rearview mirror I could see the trailer sucking up the bump and keeping our bikes stable at high speed.

You can haul up to 300 pounds of gear with one configuration of the RackandRoll trailer. It comes in two sizes and allows for the attachment of not only bike racks and gear boxes but boat mounts, ski racks, and most any other accessory that normally sits atop a car.

Convenience and extra gear capacity are the advantages. You can easily mount six bikes or multiple boats on the trailer. 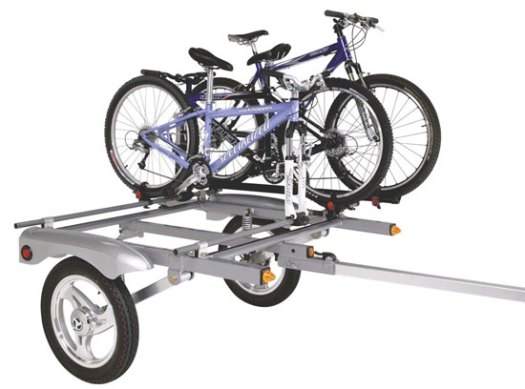 But all the capacity will cost you. Starting at $2,149, the Yakima trailers are a major investment. This price gives you the trailer and crossbars, but all mountable accessories are extra.

The trailer is about 6.5 feet wide and 11 feet long. It mounts to a vehicle hitch with a 1 7/8-inch tow ball and includes a standard electrical hookup for stop, turn, and running lights.

On our trip, the RackandRoll performed as advertised, tracking straight, rolling smooth, and hauling our equipment so seamlessly we often forgot it was there.

—Stephen Regenold is founder and editor of www.gearjunkie.com. Connect with Regenold atFacebook.com/TheGearJunkie or on Twitter via @TheGearJunkie.