The following is a review from BikeRadar.com 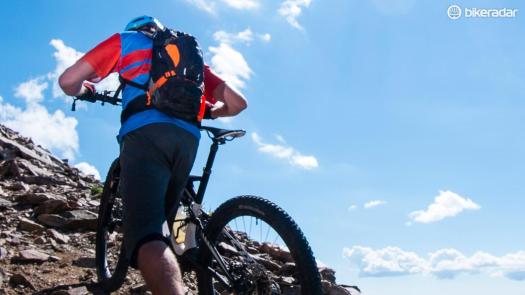 “The MULE LR is supremely comfortable, uses a top-notch reservoir and makes organizing any amount of gear easy”

Lows: Not much; upper strap buckles are hard to close, still warm on the back

Buy if: Your riding needs demand loads of gear and plenty of water and you want one of the best hydration packs on the market

Back in the early 2000s, I spent a lot of time riding with a core group of 10-12 guys who rode hard, explored every valley and mountainside, and spent huge days on their bikes. While each individual varied with their set ups and riding style, there was one constant throughout the crew, we all had CamelBak HAWG hydration packs. It gained our trust through thousands of hours of riding, bushwhacking and hanging out in the forest — and CamelBak’s current MULE LR 15 pack reminds me of those legendary HAWG packs.

It is however lighter, more streamlined, easier to wear and better in every way. I’ve been abusing this one for close to a year now and while not as pretty as when new, it shows no signs of giving up.

If you have a hydration pack you’re probably keenly aware of the log-on-your-back feeling that most packs filled with water have. For years the standard shape of a reservoir was a tall rectangle, which put the liquid’s weight vertically on your back.

CamelBak’s Crux lumber reservoir does away with that. It’s aptly named simply because having the weight up high can be a deal breaker for some riders. The Crux reservoir lowers the center of gravity to around your hips, which makes every type of riding better in my opinion. 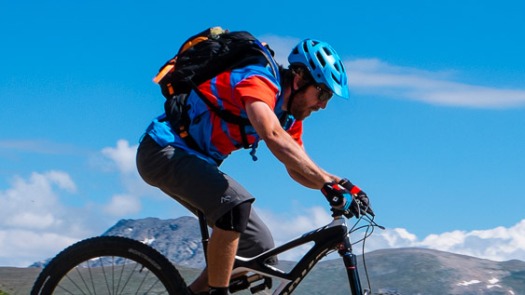 Even though all the liquid sits low in the pack it still manages to tote around a full 100oz (3 liters). Snugging up the waist belt removes most of the weight from the pack’s shoulder straps as well.

Fully loaded or rolling light it didn’t matter, the MULE rode comfortably. The straps could be let out or snugged tight to accommodate practically any load.

Perforations abound on the shoulder straps, waist belt and back panel, they’re all soft and never once did I find any of the touchpoints uncomfortable. Don’t be fooled however, there’s not that much air moving around back there, I still ended up with a sweat stain on my jersey.

Going out for a big day on the bike requires a lot of gear and hauling a lot of gear can turn into a junk show really quickly if you’re not organized. So there are pockets within pockets, zippers where needed, fleece to protect and bright interior colors to help with visibility of the stuff that migrates to the bottom.

I thoroughly appreciated having my pump, tubes and extra layer in the largest pocket. Then my food and wallet were tucked in the middle pocket, multi-tool, extra hanger and miscellaneous repair items were stashed in the zipped inner pocket and my phone typically nestled in the front fleece-lined pocket.

During long, boring slogs, or when I knew I had a road stretch to deal with before hitting the goods, I’d utilize the smaller waist-belt pockets for food. They’re placed so access in the saddle is simple and easy. Plus they zip up, so littering wasn’t an issue since one side typically turned into the rubbish bin.

On the outside of the pack a helmet can be tethered on and sloppy gear can be stashed without mucking up the goodies inside the bag.

More so than the pack part of the MULE, the Crux LR reservoir saw the biggest improvements.

First, gone are the days of struggling to remove the filler cap — once some guy made a tool to effectively be a cheater bar for removing CamelBak reservoir caps it knew a redesign was in order.

The new cap comes off with a quarter turn and then flips out of the way. There’s a handle that holds the reservoir opening open, so no more getting your fingers in there to pry it open.

The hose’s quick connect is also super handy and leaves the hose routed through the bag to simplify things, and I like that.

The hose has gained some girth, allowing even more water flow than before, and the bite valve still has a lock, which is a good thing. There’s a revised mouth piece too, which has yet to develop a dribble.

Bottom line: it doesn’t get much better

CamelBak’s M.U.L.E. name stands for ‘medium to ultra long endeavors’ and this pack lives well beyond that name.

It’s supremely comfortable, uses arguably the best reservoir and valve in the business, and makes organizing a huge amount of gear hassle-free.

Like the legendary HAWG pack I Ioved in the past, it’s a brilliant partner on any ride; short, medium or ultra long.